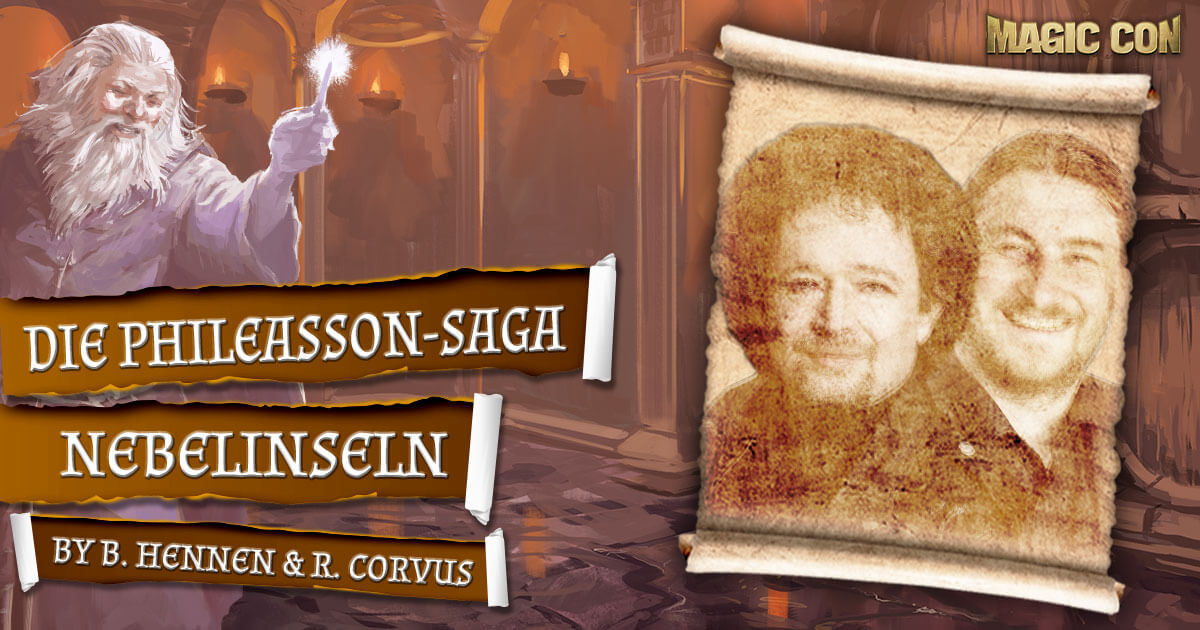 The greatest explorer and the greatest plunderer of their time face off in an epic contest to determine once and for all who deserves the highest honorary title of Thorwal: King of the Seas! Asleif “Foggwulf” Phileasson and Beorn “the Dazzler” Asgrimmson circumnavigate the known world, facing twelve heroic tasks along the way.

In the tenth adventure, Nebelinseln, the captains have found themselves in an alien world where a civil war rages between the elves. The real enemy, however, is the Serpent King, who stole the Cauldron of Life.

Bernhard Hennen and Robert Corvus present the seventh volume of the Phileasson-Saga: Nebelinseln in a reading with audience discussion and singing at the MagicCon 5.

Duration: 60 min  -  The Lecture will be held in: german
Bernhard Hennen, born in 1966, studied German language and literature, history and Near Eastern antiquity. As a journalist, he traveled the Orient and Central America before devoting himself entirely to writing fantastic novels. More than 35 novels have now been published. With his Elfen-Saga, he stormed all the bestseller lists and wrote his way to the top of the German fantasy authors. His books have now been published in ten countries and have sold more than five million copies. He is currently returning to his most successful fantasy cosmos with the Schattenelfen trilogy; the prelude volume Die Blutkönigin was published in 2021. Yet the beginning of this writer's career looked quite different: At times, Bernhard had to take any job that came along to make ends meet for himself and his family - among other things, he worked as a show fighter at medieval fairs and as a Santa Claus. An arsenal of swords from that time has to share space in his house with a sprawling collection of pewter figures. From time to time he moves out with these miniature armies to indulge in his hobby at tabletop events. Bernhard Hennen lives with his family in Krefeld. With Robert Corvus we welcome one of Germany's most successful fantasy authors at MagicCon. Currently, Ruinen der Macht, the final volume of his trilogy Gezeiten der Macht has been published. Titles such as Feuer der Leere and Das Imago-Projekt preceded it. He has been active in BattleTech and occasionally writes for the world's greatest science fiction series, Perry Rhodan. He is also the translator of the Dune role-playing game. Together with Bernhard Hennen, Robert is adapting one of the basic adventure campaigns of the The Dark Eye role-playing game, Die Phileasson-Saga, as a twelve-part novel series. Robert has been a full-time writer since 2013. Before that, writing was a hobby and avocation for 25 years. Robert has been a soldier, management consultant and project manager in international corporations. He has backpacked around the world, pilgrimaged to Santiago de Compostela and taught karate. After working in Münster and Sindelfingen, he now lives in Cologne.