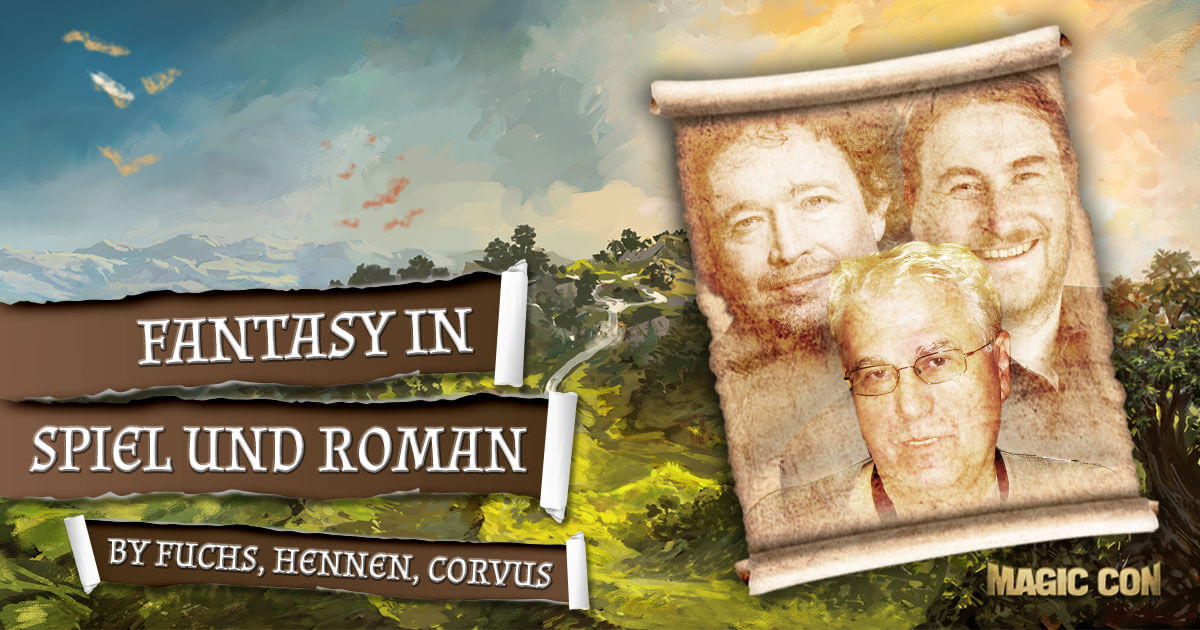 As co-inventor of The Dark Eye, Werner Fuchs has shaped the most successful fantasy world in the German-speaking world. Countless fans clothed their characters in chain mail shirts and magician’s robes to explore the continent at the gaming table, fight for justice, defeat ogres and crush sinister cults.

Bernhard Hennen, today one of the most successful authors in Germany and translated into ten languages, also entered the realm of fantasy through this gate. His first novels were based in Aventurien – and one of his current projects, the twelve-volume Phileasson-Saga, is based on a series of adventure games he wrote for The Dark Eye in the early 1990s.

The second author of the Phileasson-Saga is Robert Corvus. He discovered The Dark Eye in 1984, with the first edition of rules, and later contributed seven novels to this universe. His independent works belong to Dark Fantasy. Ever since Silberflamme made it onto the Spiegel bestseller list, he has become one of the most successful fantasy authors in Germany.

On MagicCon Werner, Bernhard and Robert open the door to their workshops and give insight into the forges of the German fantasy scene. How do sensational successes such as the role-playing game The Dark Eye and the cycles of novels about Die Elfen emerge? How do you adapt an adventure campaign like the Phileasson-Saga for novels – and how do you do it with two authors?

Michael Solitair will chair the panel.

Duration: 60 min  -  The Lecture will be held in: german
Bernhard Hennen published more than 35 novels published in ten countries. With his Elfen series he stormed the bestseller lists, altogether his books have sold more than 5 million copies. The beginning of this career as a writer was quite different: At times, Bernhard had to take on every possible job in order to get himself and his family through - among other things, he worked as a showman at medieval markets and as a Santa Claus. Robert Corvus is known in science fiction (e. g. Feuer der Leere, Das Imago-Projekt) and fantasy (e. g. Drachenmahr, Die Schwertfeuer-Saga). Until 2012, Robert was initially a corporate consultant and then project manager. Together, Hennen and Corvus write the Phileasson-Saga. Werner Fuchs worked with both authors at the beginning of their careers. He is co-inventor of the most successful fantasy world in the German-speaking world, The Dark Eye. From 1972-74 he was co-editor of the science fiction series "Fischer Orbit" and from 1980-87 editor of the series "Knaur Science Fiction". Today he works as an agent (e. g. George R. R. Martin) and publisher (Fanpro).

Sources & additional links for Fantasy in game and novel: